The National Trout Center uses FishBase, a global compendium of biodiversity information on more than 32,000 species of fish, for authoritative information on the taxonomy, biology and ecology of species in the salmonid family, as well as other fishes that occur in environments inhabited by salmonids.

The naming of fishes and all other organisms known as animals is governed by the International Code of Zoological Nomenclature. This code specifies how names are established and which name must be used (in scientific discourse) in case of name conflicts. The Code determines what names are valid for any taxon in the family, genus, and species groups.

Taxonomy of the Salmonidae
The Latin name of the family is Salmonidae, with a “-dae” suffix denoting the “family” taxonomic level. The anglicized name is “salmonid”, refering to the salmon family within the larger taxonomic order, “Salmoniformes”. Included are three sub-families, Salmoninae, Coregoninae, and Thymallinae, bearing the sub-family suffix “-nae” and denoted with the vernacular names[link to: “Vernacular Names” file] salmon (and trout), whitefishes, and grayling. Sub-families are usually designations that collect together closely related species, a practice important in systematics and taxonomy, but only infrequently carried over into the jargon of the general public. Genus (plural “genera”), the next grouping of species below the sub-family level designates a taxonomic platform suitable for assigning Linnaean Latin binomial names to individual species.

The species designation is the fundamental unit of classification that has served the biological sciences since Swedish zoologist Carl Linnaeus published Systema Naturae in the middle of the 18th century. The structure of the name in print is genus, always capitalized, followed by the “specific epithet”, always lower case and never capitalized. The two-part name for a particular species is called its “binomial” and it is usually italicized (or underlined) in printed media. Each of the two parts of the name may carry additional meaning peculiar to the life history of the named animal. Thus, for the brook trout, Salvelinus fontinalis, the genus identifies the fish with the old name for char, based on the root of the German “saibling” meaning little salmon. The specific epithet, means living in springs.

FishBase recognizes 11 genera and 228 species world-wide in the family Salmonidae. All salmonids are native to the northern hemisphere, but widely planted in suitable habitat in the southern hemisphere. In the sub-family Salmoninae (trout and salmon) the best-known genera are Salmo, Oncorhynchus, Salvelinus, and Hucho. The Coregonines (whitefish) include the genera Coregonus, Prosopium and Stenodus, and the Thymallinae (graylings) are represented by two species in the genus Thymallus. 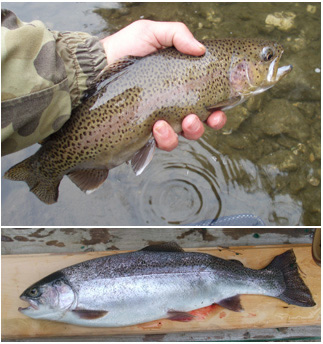 Trout are among those fishes that have remarkable ability to adapt their own body colors to their environments. Three common types of adaptation are readily apparent among salmonids. One is called “countershading” in which the dorsal surface (upper) of the fish becomes darker, or, colored the same as the water would appear to an observer looking downward toward the fish. As you might imagine, the ventral surface (lower) of the body can be colored light, or, white, so that an observer under the fish and looking up toward the water’s surface would see a light or white hue. In this way, countershading helps to make the fish less visible to potential predators, such as birds, or other fish. Small stream (upper) and large lake (lower) rainbow trout

Trout and closely related species such as salmon, whitefish and grayling have played venerable roles in the cultures of the northern hemisphere. They are manifest in our literature, music, commerce, gastronomy, mythology, economics, religions and politics. These varied roles have spawned a plethora of names for the various species.

The fishes themselves have engendered many of the names by which they are known. For example, the troutperch, Percopsis omiscomaycus, a small species of fish inhabiting a broad range of North American cool and cold-water lakes and streams, is neither a trout nor perch, nor a hybrid of these fish. They share an anatomical feature of true trout, a spineless, rayless, (fleshy) adipose fin between the dorsal fin and caudal (tail) fin. They are also similar in appearance to the common yellow perch.

Likewise, human interest in a particular species may have evoked a name associating a fondness for one fish in the naming of another. The sea trout of the Atlantic and Gulf coasts of North America, https://en.wikipedia.org/wiki/Cynoscion_nebulosus, actually a member of the drum family, and the greenling sea trout of the Pacific coast, Hexagrammos decagrammus, are not trout at all but are known in their respective geographic regions by vernacular names that include the word “trout”. To further complicate matters, “sea trout” can also refer to true trout or salmon that live in the sea or migrate to or from the sea.

Original use of the term “sea trout” by the Swedish zoologist Carl Linnaeus, referred to the anadromous form of the brown trout, Salmo trutta. In the 1758 edition of Systema Naturae, Linnaeus also described a lake-dwelling form, Salmo lacustris, and a river-dwelling form, Salmo fario. This behavioral and geographic disdinction has run rife through our naming of various fish allowing rainbow trout, for example, Oncorhynchus mykiss, to be denoted as steelhead, Kamloops, and red-band trout. Similarly, brown trout imported to North America have sometimes been referred to by their geographic origins, hence, “German brown trout”, or, “Loch Levan brown trout”.