You are here: Home / Visit Us / Trout of the Driftless

Three species of trout have been successfully used to establish sport fisheries in the driftless region of the upper midwest. Fishery managers now have the options of planting each of these species at sizes ranging from fingerlings to catchable fish. In streams with suitable water quality and spawning habitat, hatchery plantings have been progressively replaced by naturally-spawned year-classes of fish. In streams with less suitable environmental characteristics, seasonal fisheries have been established and maintained annually with supplemental stockings. Today, the upper midwest has a rich diversity of trout fisheries in hundreds of miles of trout streams due to improvements in water quality, changes in land use and increasingly effective fish cultural practices. How did these fisheries become established in the streams and rivers of the driftless area? 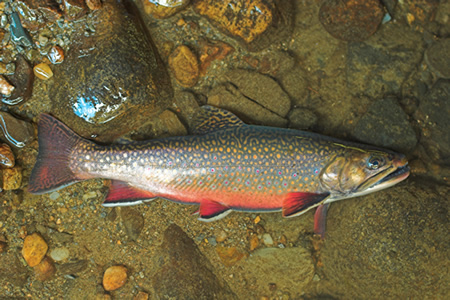 Swimming within the cold, clear waters of the spring-fed streams of the driftless region, our native brook trout are the only descendants of the trout clan known to have been present when Europeans first came to the region. Revered world-wide for their beauty, outstanding table quality and fine gamefish attributes, these fish have become the hallmarks of excellent water quality. Brook trout, also known as eastern brook trout or, “speckled trout” in Canada, are the lotic (stream-dwelling) cousins of the lake trout, the deep-water inhabitant of the Great Lakes and large lakes of the far north. Together with the dolly varden and bull trout of the west, and arctic char of the boreal regions, these fish represent the “char” side of the salmon and trout family in North America. All these species of char are dark-bodied fish freckled with lighter spots and vermiculation. Our brook trout has the additional color features of red spots surrounded by blue halos, and black and white-striped fins during the spawning season.

Contrast these colors on our native trout to the lighter yellow-brown body of the brown trout, variously covered with brown and red spots. These fish, imported to North America in the late 19th century, quickly spread throughout the continent due to widespread stocking practices of resource management agencies. Several varieties of brown trout, including the German brown and the Loch Leven trout of Scotland, established naturally-reproducing populations in suitable streams and rivers, effectively competing with, and, in some cases, displacing native trout. These fish are fine table fare and excellent game fish that are adaptable to a somewhat broader range of environmental conditions than our native brook trout.

Another “exotic” species, the rainbow trout of the Pacific slopes of North America, was also extensively introduced to waters east of the Rocky Mountains by enthusiastic fish culturists in the late 1800s. Like the brown trout, many populations of these rainbows eventually became self-sustaining in midwestern streams, particularly in tributaries of the Great Lakes. Rainbows have been especially favored by sport-fishing enthusiasts because of their dramatic striking of the lure and vigorous acrobatics when hooked. Unlike the fall-spawning brook and brown trout, rainbows naturally spawn in the springtime.

Who would have guessed that a fourth trout would emerge to provide even greater diversity of choices in the fisheries of the driftless region? That fish is the tiger trout, the hybrid produced by a brown trout female spawning with a brook trout male!
This is an “inter-generic” hybrid, that is, a hybrid from somewhat distantly related species, and is invariably sterile. Even when tiger trout are deliberately produced in hatcheries, there is a high mortality rate in the juvenile fish, leading hatchery managers to conclude that tiger trout would not be regularly produced to supplement more traditional trout fisheries. Nevertheless, since brook and brown trout are fall spawning species, it is inevitable that some wild Tiger trout will be naturally produced in waters inhabited by both brook trout and brown trout. Thus, the driftless region can be said to offer anglers the opportunity to catch up to four distinct kinds of trout. Taking all four of these in a single trip might be the definition of the Grand Slam of the driftless region!